The Polish Journal of Aesthetics, special issue “The Affective Aesthetics of the Body in Pain”, 51 (4/2018) 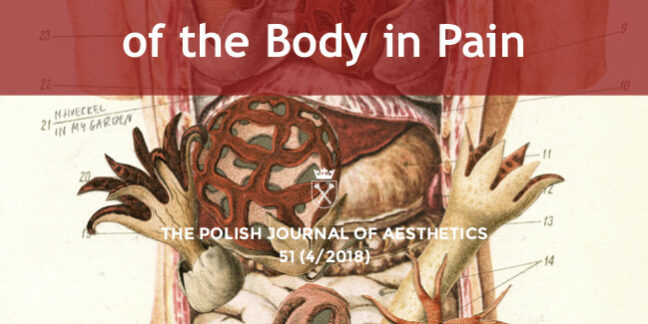 The Polish Journal of Aesthetics special issue “The Affective Aesthetics of the Body in Pain”, 51 (4/2018)

The pivotal category of affective aesthetics allows for analyses of literary texts and visual art conjoined with an important set of questions about the national, social, familial and sexual dimensions of embodiment. Affects—through artworks—function as forces which enable subjects to move and to be moved and, therefore, have the capacity to transform both individual and collective subjectivities. Physical pain—in all its degrees of intensity—is a constant presence in human life. However, it can be argued that only recently has it started to attract sustained critical attention. Virginia Woolf’s On Being Ill (1926) is a precursor of what is now considered a turn to illness: Elaine Scarry, Susan Sontag, Leslie Jamison, Audre Lorde and Johanna Hedva are among the many critics and theorists who have worked on what it means to inhabit a dysfunctional and/or ill body. We might even contend that there is a tendency across cultures and geographies to inscribe the body in pain into the artistic text in order to call for active interaction with the readership/audience. Such interaction would resist a mere aesthetic contemplation of the object of the artwork (namely, the body in pain) and instead inspire empathic and ethical engagements as well as social interventions.

In this special issue of The Polish Journal of Aesthetics we explore—from a multiplicity of perspectives, cultural and historical contexts—the ways in which artistic projects shape distinct affective states of experiencing pain and illness. The concept of pain is here extended beyond physical distress to also embrace illnesses that may not have an associated sensation of bodily discomfort. Far from considering “the body in pain” as a unified category, we start from the idea that each illness, each pathology and each painful body part is the result of individual experience as much as of socially constructed notions of what it means to be in pain or to experience illness. Therefore, the collective and political potential of pain interests us as much as its phenomenology as a personal and individual experience.

This website uses cookies to improve your experience while you navigate through the website. Out of these, the cookies that are categorized as necessary are stored on your browser as they are essential for the working of basic functionalities of the website. We also use third-party cookies that help us analyze and understand how you use this website. These cookies will be stored in your browser only with your consent. You also have the option to opt-out of these cookies. But opting out of some of these cookies may affect your browsing experience.
Necessary Always Enabled
Necessary cookies are absolutely essential for the website to function properly. These cookies ensure basic functionalities and security features of the website, anonymously.
Analytics
Analytical cookies are used to understand how visitors interact with the website. These cookies help provide information on metrics the number of visitors, bounce rate, traffic source, etc.
SAVE & ACCEPT